Mdm2 is an important negative regulator of the TP53 tumor suppressor via a negative feedback loop in which TP53 activates the transcription of the MDM2 gene.

Mdm2 acts as an E3 ubiquitin ligase, targeting both itself and TP53 for degradation by the proteasome. Several lysine residues in the carboxy-terminus of p53 have been identified as the sites of ubiquitination, and it has been shown that p53 protein levels are downregulated by Mdm2 in a proteasome-dependent manner. Mdm2 is also capable of auto-polyubiquitination.
Binding of mdm2 to the amino-terminus of p53 protein also lead to repression of its transcriptional activity. 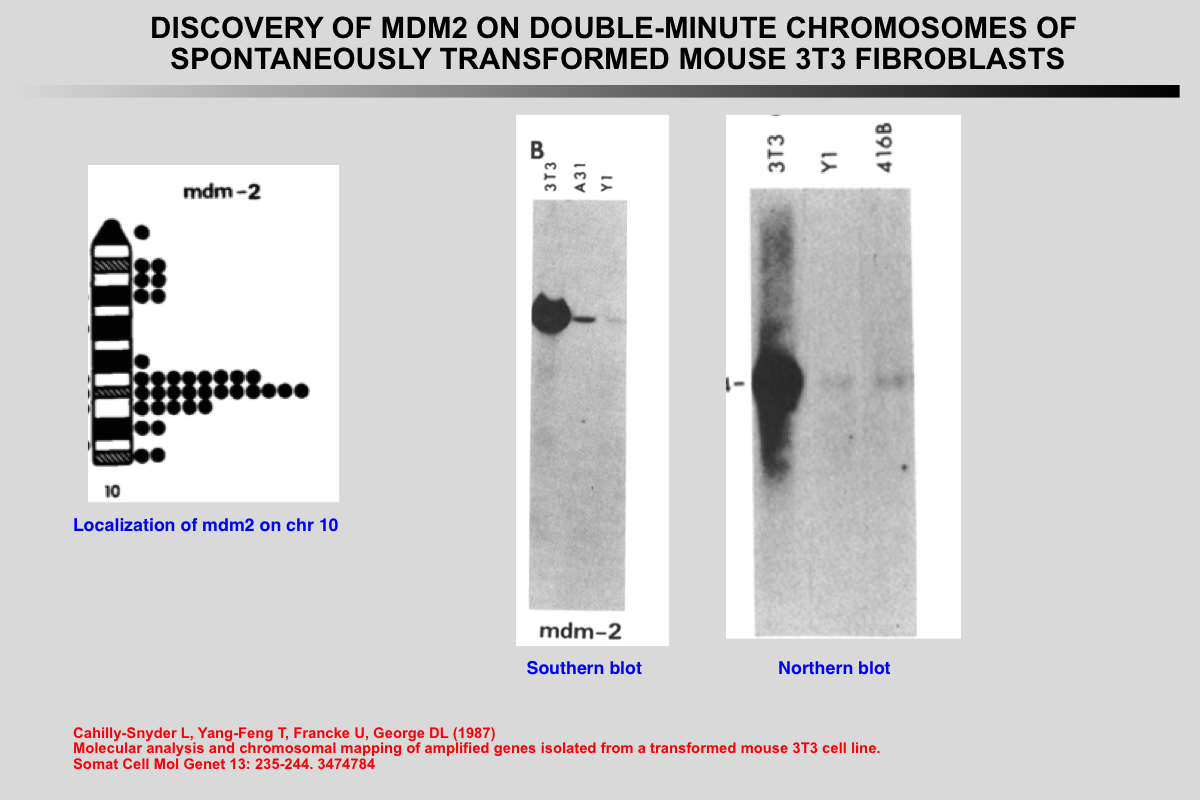 The murine double minute 2 (mdm2) gene was originally identified as one of three genes (mdm1, 2, and 3) that were overexpressed more than 50-fold by amplification in a spontaneously transformed mouse BALB/c cell line (3T3-DM). 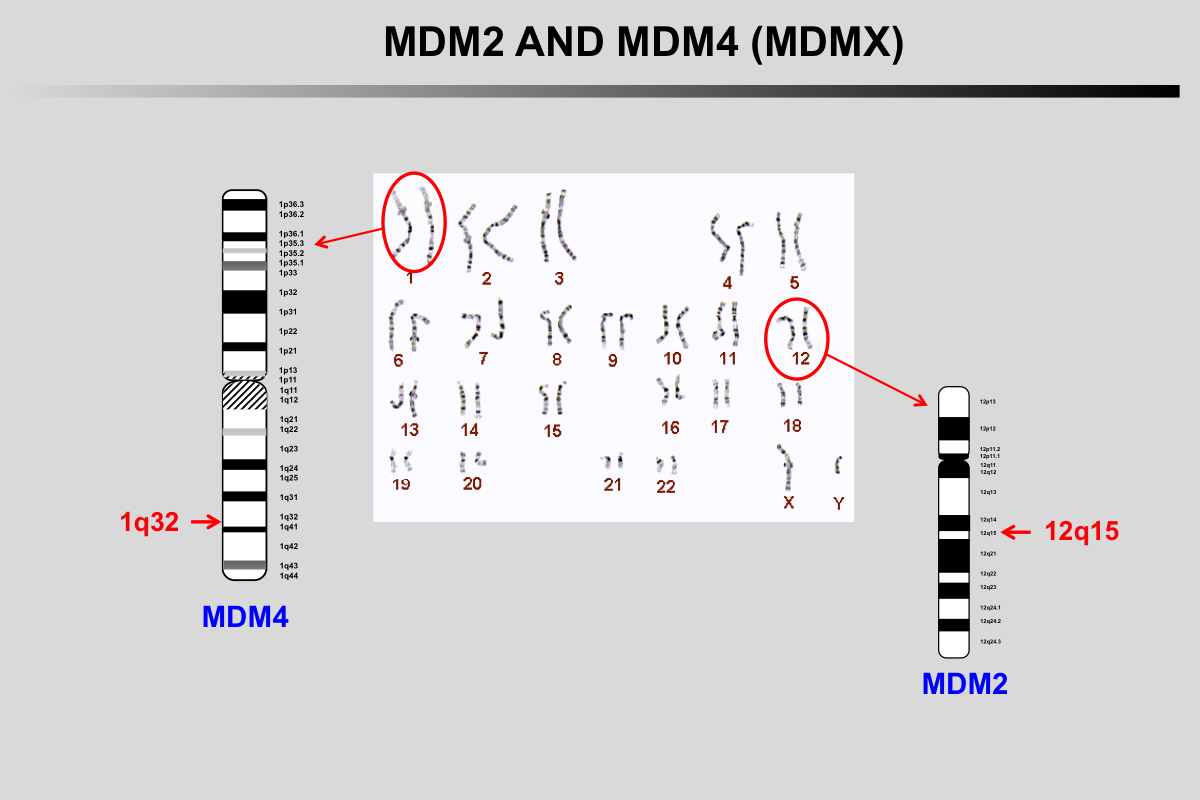 MDM4 (MDMX) gene is localized on chromosome 1q32, a region frequently amplified in retinoblastoma as well as other cancers.

Discovery of MDM2 as a p90 protein bound to p53 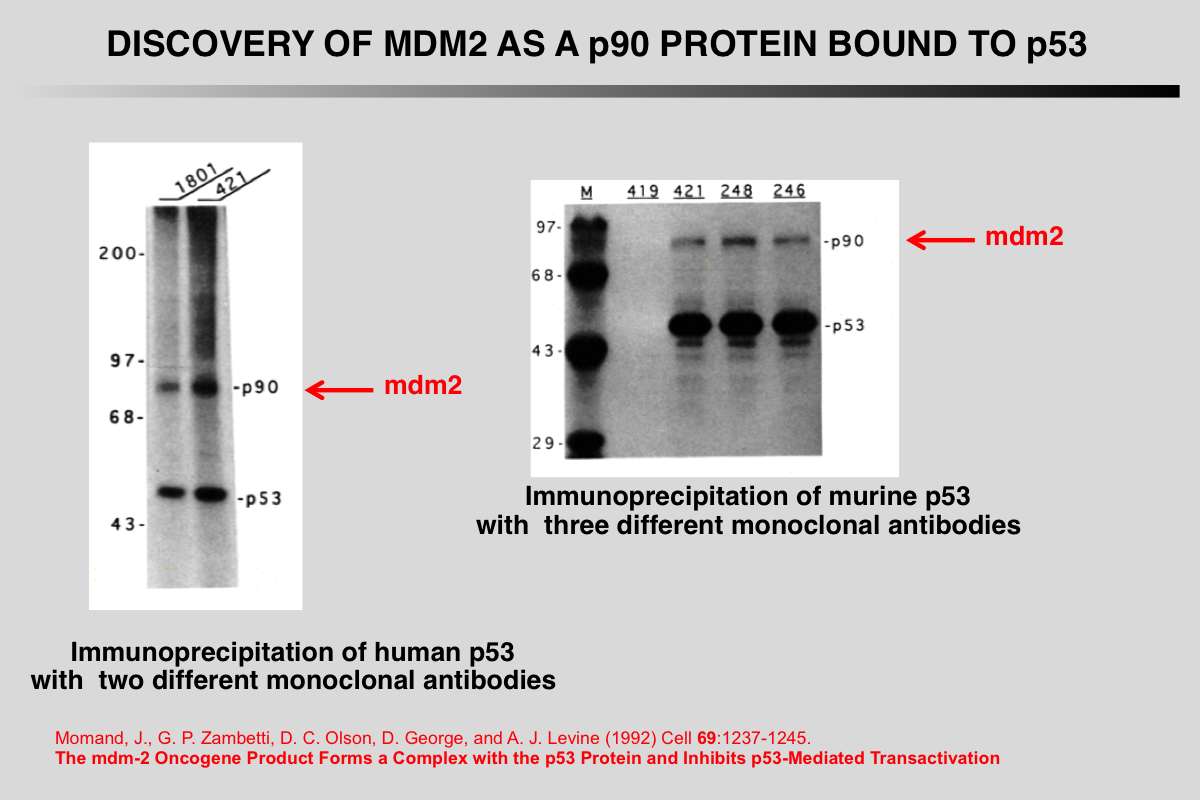 To explore the biochemical functions of p53, we have initiated a search for cellular p53-binding proteins. Coprecipitation of three polypeptides was observed when cell lines overexpressing a temperature-sensitive (ts) p53 mutant were maintained at 32.5 degrees C (wild-type p53 activity, leading to growth arrest) but not at 37.5 degrees C (mutant p53 activity). One of these three proteins, designated p95 on the basis of its apparent molecular mass, was highly abundant in p53 immune complexes. We demonstrate herein that p95 is a p53-binding protein, which exhibits poor p53-binding in cells overproducing several distinct mutant p53 proteins. Yet, p95 associates equally well with both the wild-type (wt) and the mutant conformations of the ts p53 in transformed cells growth-arrested at 32.5 degrees C. On the basis of our findings we suggest that wt p53 activity increases p53-p95 complex formation and that such interaction may play a central role in p53 mediated tumour suppression.

A cellular phosphoprotein with an apparent molecular mass of 90 kd (p90) that forms a complex with both mutant and wild-type p53 protein has been characterized, purified, and identified. The protein was identified as a product of the murine double minute 2 gene (mdm-2). The mdm-2 gene enhances the tumorigenic potential of cells when it is overexpressed and encodes a putative transcription factor. To determine if mdm-2 could modulate p53 transactivation, a p53-responsive element from the muscle creatine kinase gene was employed. A wild-type p53-expressing plasmid enhanced the expression of the p53-responsive element when cotransfected into cells that contain no endogenous p53. When a cosmid expressing mdm-2 was transfected with this p53-expressing plasmid, the transactivation of the p53-responsive element was inhibited. Thus, a product of the mdm-2 oncogene forms a tight complex with the p53 protein, and the mdm-2 oncogene can inhibit p53-mediated transactivation.

MDM2 is amplified in human sarcoma 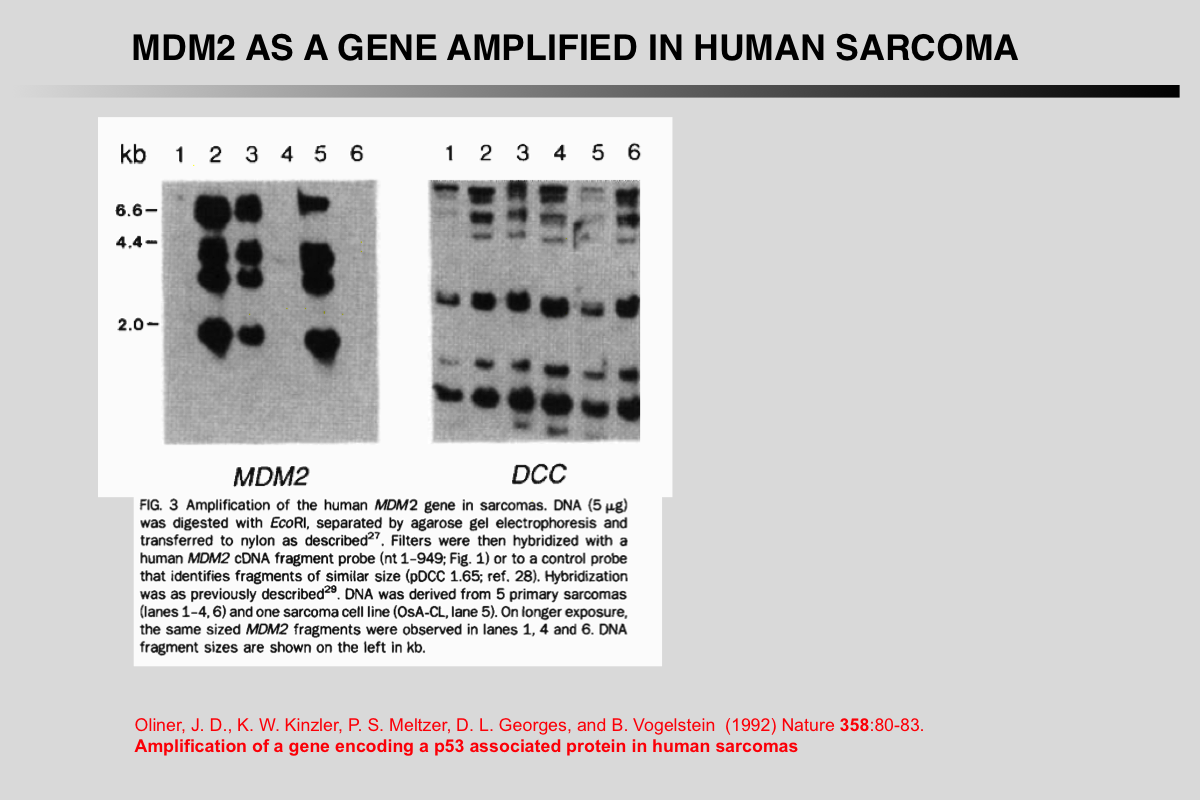 Despite extensive data linking mutations in the p53 gene to human tumorigenesis, little is known about the cellular regulators and mediators of p53 function. MDM2 is a strong candidate for one such cellular protein; the MDM2 gene was originally identified by virtue of its amplification in a spontaneously transformed derivative of mouse BALB/c cells and the MDM2 protein subsequently shown to bind to p53 in rat cells transfected with p53 genes. To determine whether MDM2 plays a role in human cancer, we have cloned the human MDM2 gene. Here we show that recombinant-derived human MDM2 protein binds human p53 in vitro, and we use MDM2 clones to localize the human MDM2 gene to chromosome 12q13-14. Because this chromosomal position appears to be altered in many sarcomas, we looked for changes in human MDM2 in such cancers. The gene was amplified in over a third of 47 sarcomas, including common bone and soft tissue forms. These results are consistent with the hypothesis that MDM2 binds to p53, and that amplification of MDM2 in sarcomas leads to escape from p53-regulated growth control. This mechanism of tumorigenesis parallels that for virally-induced tumours, in which viral oncogene products bind to and functionally inactivate p53.

MDM2 and MDM4 (MDMX) are amplified in human cancer 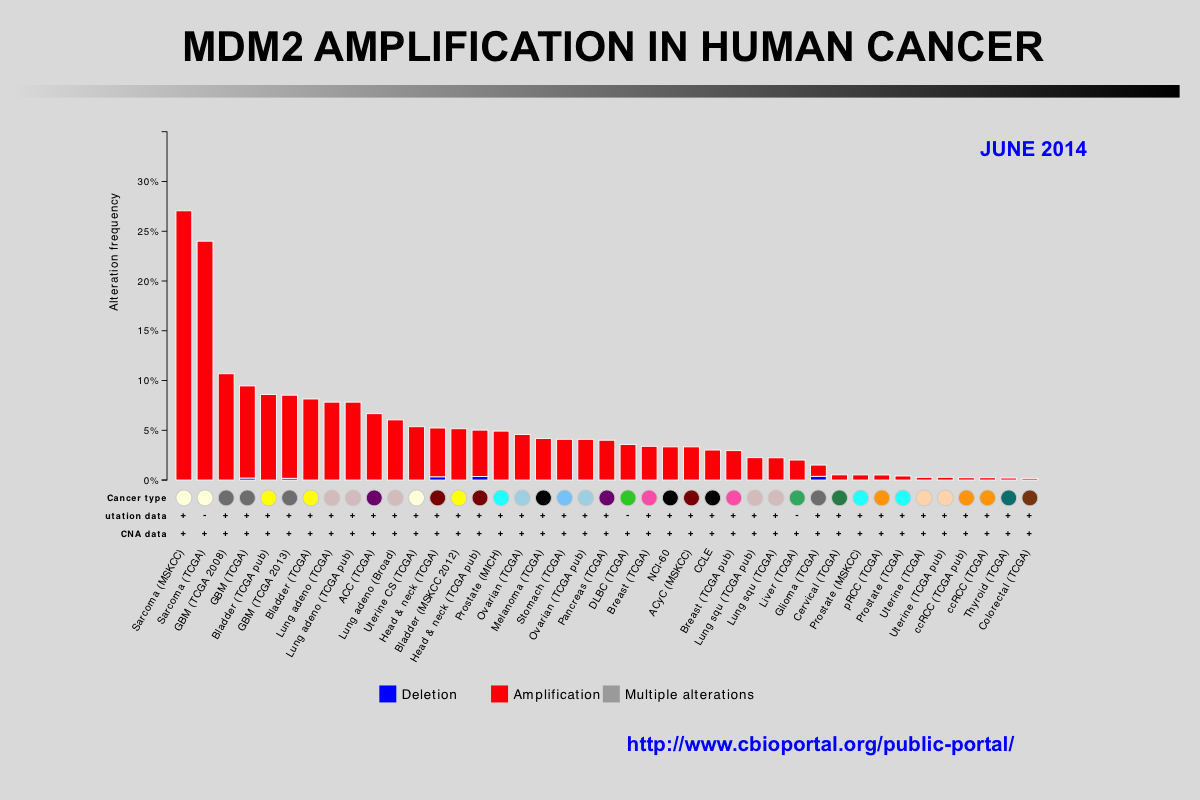 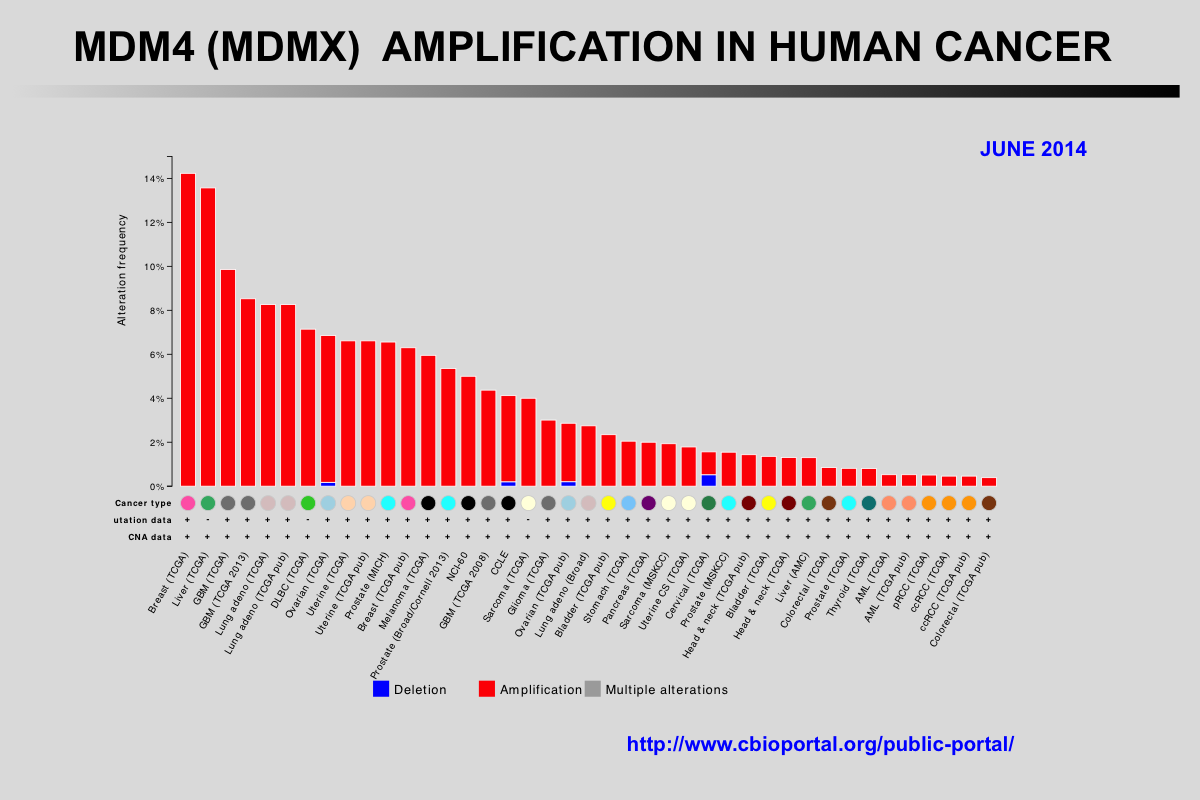 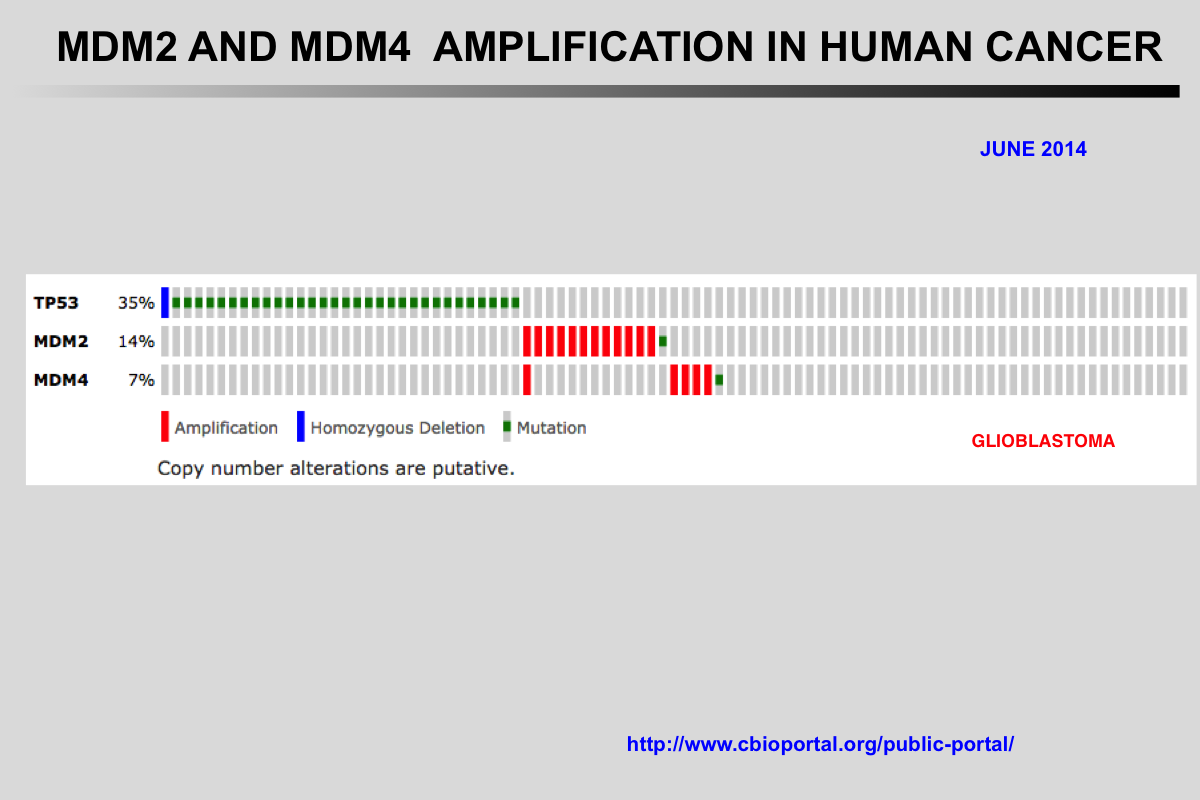 The Cancer Genome Atlas (TCGA) recently published the results of comprehensive genomic analyses of tumor samples from more than 4,000 patients with various types of cancer
Amplification of the MDM2 and MDM4 (MDMX) genes has been described in multiple tumors and these genes are considered to be potentially targetable. The mutual exclusivity of TP53 mutations and MDM2 or MDM4 amplification indicates that these alterations target the same pathway.

Recently, small molecular inhibitors of MDM2 and MDM4 have been developed and are currently being evaluated in clinical trials for several cancer types. 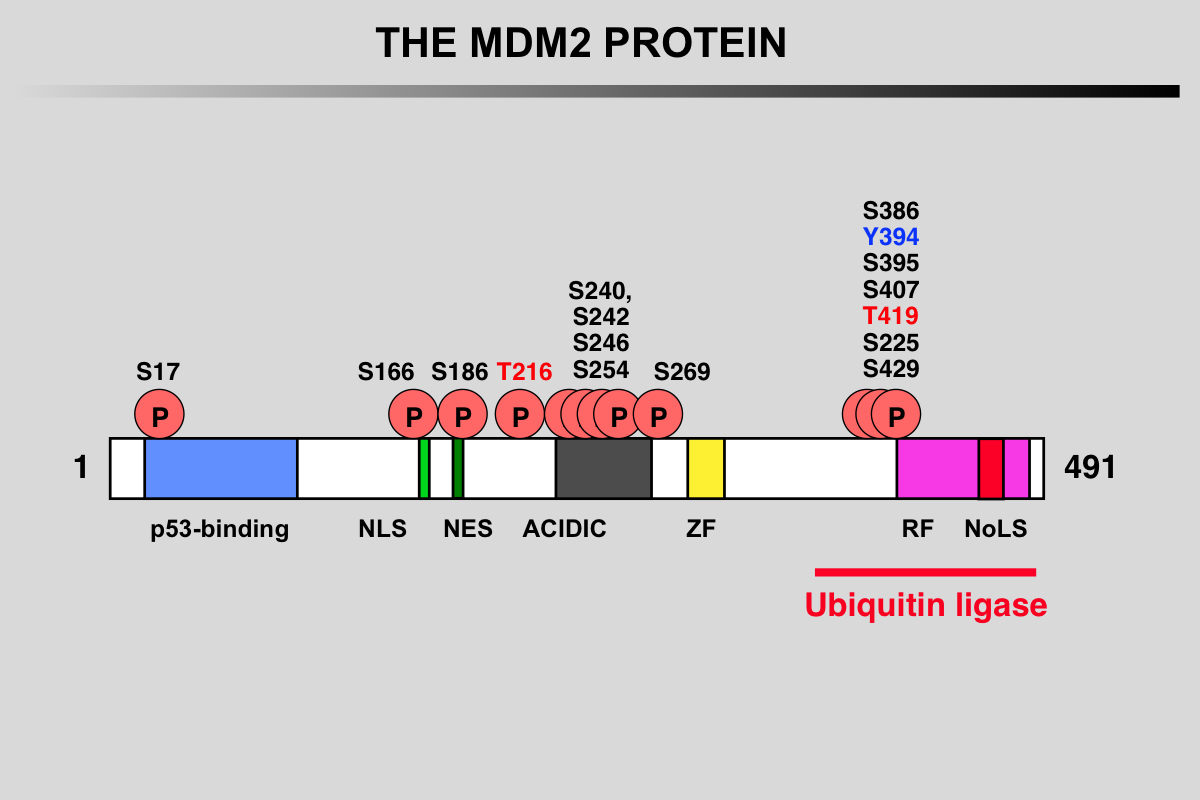 Functional domains and phosphorylation sites on the MDM2 protein 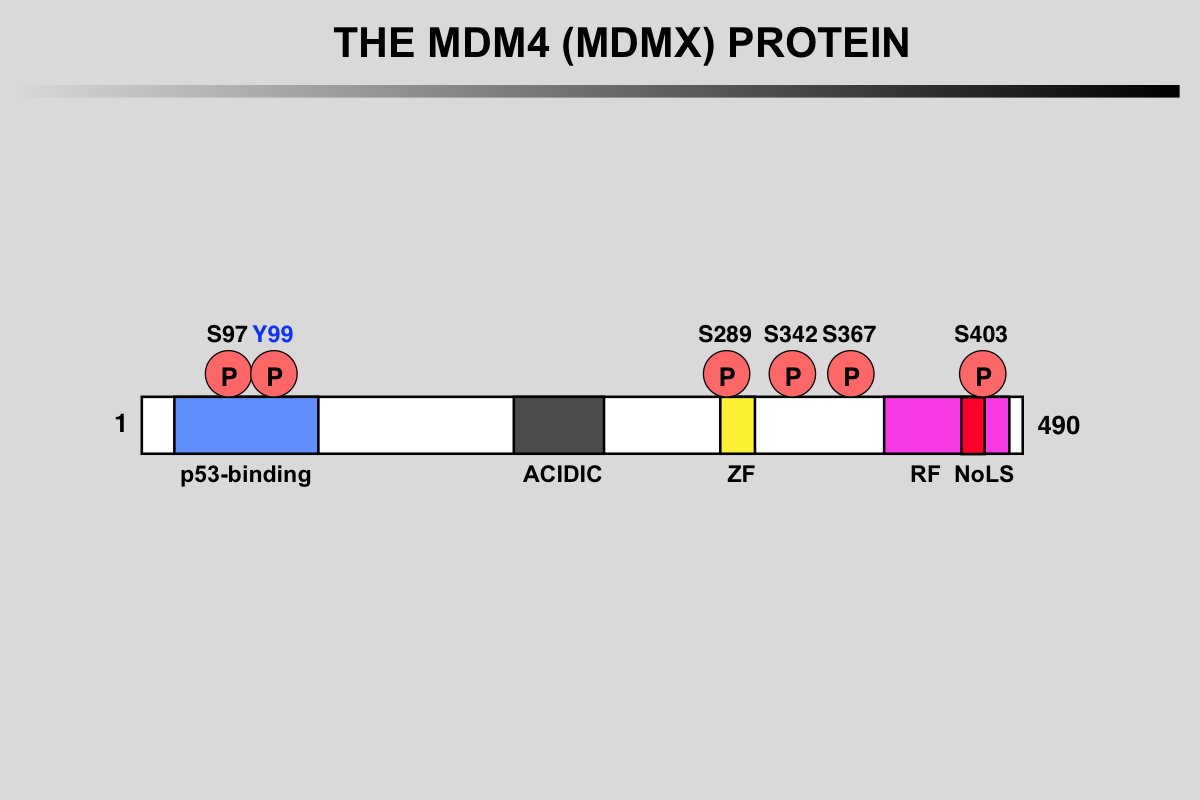 Functional domains and phosphorylation sites on the MDMX protein. This protein does not possess any ubiquitination activity. MDMX binds to MDM2 and acts as a cofactor for TP53 modification. 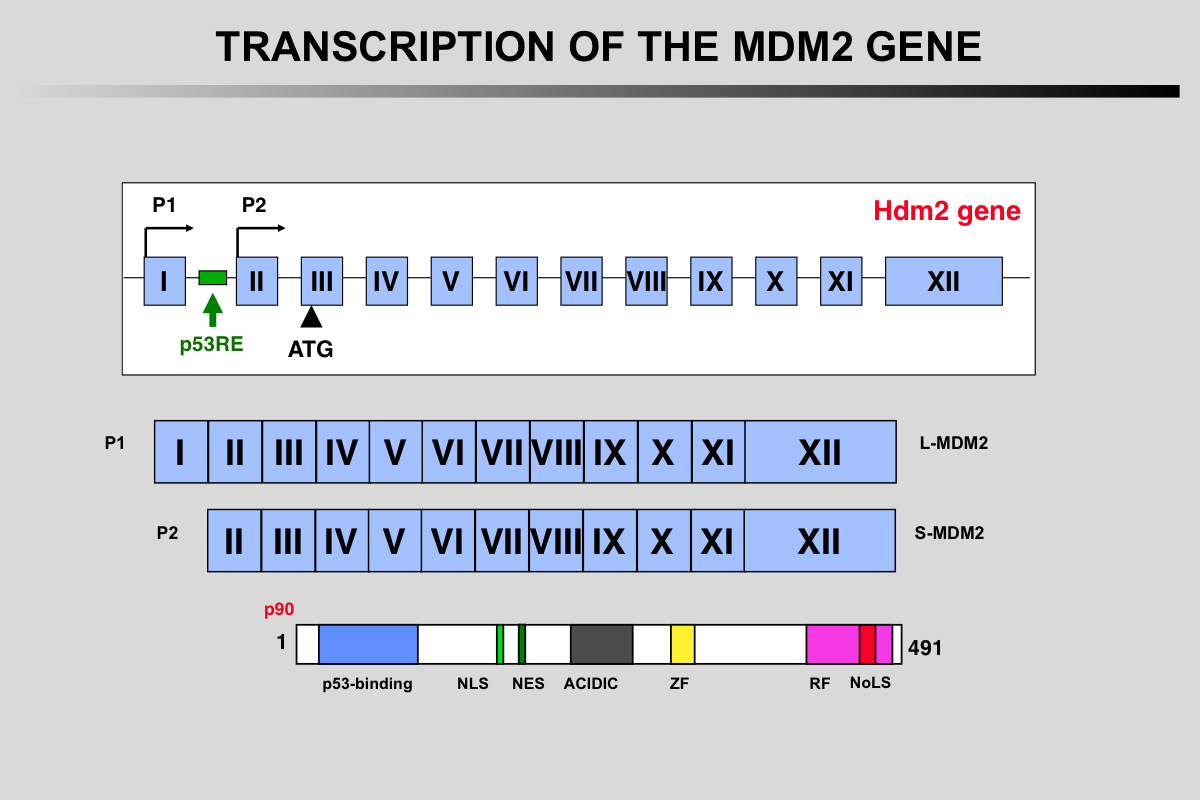 Transcription of the MDM2 gene. 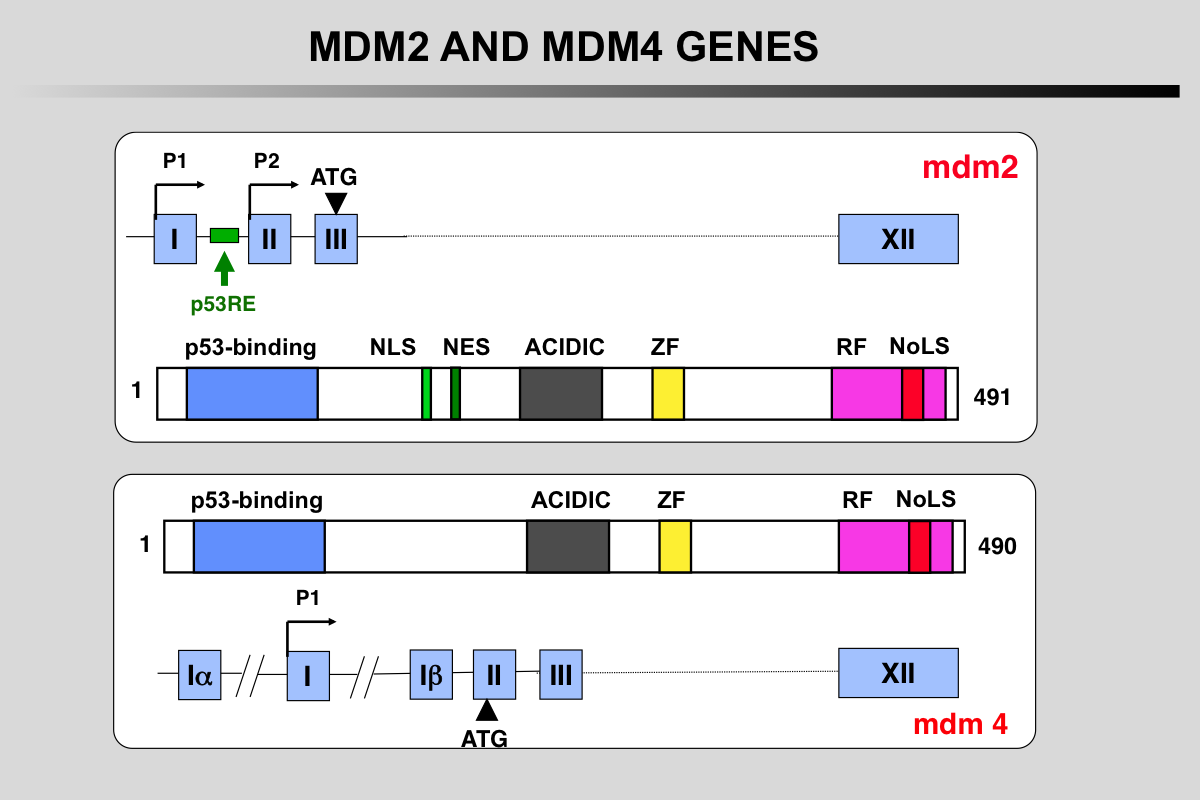